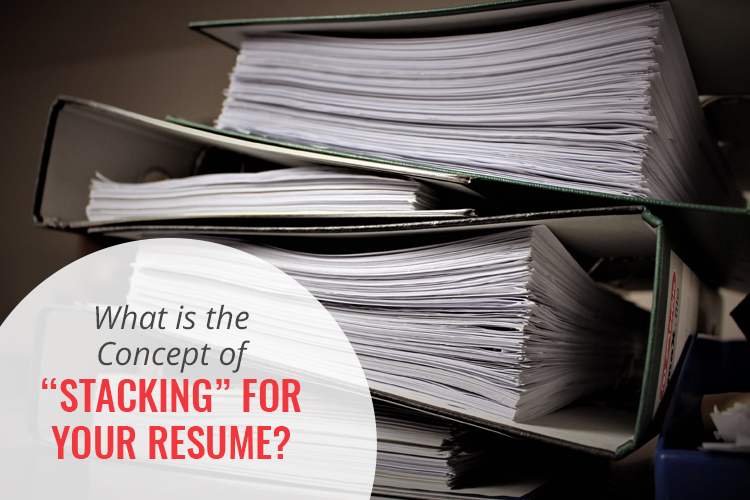 How many jobs have you had throughout your career?

Rather than move from company to company, some people find a fantastic job, and then stick with that company for years afterward. They climb the ranks, getting new positions with progressively greater responsibilities and higher pay. The problem is that, when you put all of those jobs on a resume, it can end up looking like you’ve had an unstable career with a ton of jobs with very short tenures.

It’s an issue that rears its head a surprising amount in interviews. Often, an interviewer or recruiter won’t have the time to review your resume carefully. If they see multiple jobs within a few years, that’s going to set off alarm bells. You could provide detailed information under each job, but this usually makes your resume way too long.

If you have had more than one job at a company, a writing technique called “stacking” might be an excellent way to show career progression.

“Stacking” is a resume writing technique where you put all the jobs you held at a company, along with the dates you held those jobs, one after the other. You can then combine the work during that tenure into a single block, making it easy for a reader to quickly see that all of those jobs were with the same company.

A few years ago, I was working with a client who was in this exact position. She worked with the same company for 24 years in a variety of different jobs. To get this across in her resume, we “stacked” her jobs and put them front and center in the middle of the first page.

We then combined all of her different accomplishments and roles at the company in the experience section of her resume. We put her last job as the main focus.

You can use this technique to show career progress and stability, no matter how many jobs with a company you’ve had. For example, if you’ve only had two:

If someone brings up your series of short-lived jobs in an interview, you now have a way to explain your situation quickly. It shows that you weren’t complacent about your career, and were always taking steps to move forward, growing your skills and experience within that company. Moreover, the concept of stacking will show an interviewer that you are dependable, experienced, and loyal to the company that employs you.

Stacking is just one of the “tricks” that’s only known to professional resume writers like me. As a recruiter, I reviewed thousands of resumes, so I know how to frame your experience so it will be understood at a glance. If you’d like to get a start creating a brand-new resume that will frame you and your professional experience in the best possible light, please book a free consultation with me today!